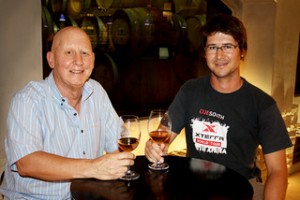 With Anri in the tasting room at Beyerskloof

Anri Truter is as homegrown as the lyrics in a well known Afrikaans folk song – Die Stellenbosse boys kom weer.

Anri, winemaker at Beyerskloof Estate, is a true born and bred product of Stellenbosch. Born in Stellenbosch, grew up on Kanonkop Wine Estate and matriculated at Paul Roos Gimnasium. After school he and a friend took a gap year in Europe where they worked in a wine shop, a coopery and even an ice cream factory! 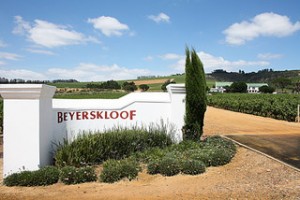 Welcome to Beyerskloof - The home of Pinotage

After the year in Europe he enrolled at Elsenburg Agricultural College where he completed his studies in winemaking and viticulture. During his time at Elsenburg, if not studying or making wine, he played rugby for the College. A favourite pastime of his.

With Beyers Truter as father, and literally learning to walk and talk on a wine farm, some will say it was destined that Anri would follow in his father’s footsteps. Even more so if you rubbed shoulders with wine icons like Boland Coetzee, Sakkie Kotze, Kevin Arnold and Francois Naude.

Anri first thought he might become a game ranger because he loves wildlife and nature.  Till he realized how scary lions can be! But for a man who is scared of lions he showed no fear in prohibiting the president of the United States of America to visit Kanonkop!

It was a Saturday afternoon and the annual Nederburg Wine Auction was in full swing and Anri, then fourteen, was home alone and in charge of the farm.  When Bill Clinton’s aides got to the farm and asked to be allowed on to the premises Anri told them it would not be possible. He was the only one there and he could not allow it. The president can come back at a later time! 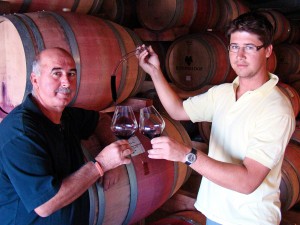 Maybe it’s because of this cool-headedness under pressure why Wine Magazine labeled him as one of the rising stars of the South African wine industry.

“For a young winemaker, Anri is surprisingly traditionalist. I am a sucker for tradition in wine, he laughs, adding that he imagines the industry would be better off head it been kept small. It would have been nice to make wine in the ‘80s and ‘90s. In those years all the winemakers knew each other, shared ideas, got together for tastings and the industry had much more of a family feel to it.”

But don’t let the youth of this winemaker fool you. During his short career he already won enough trophies and accolades like Veritas, ABSA Pinotage Top 10 to satisfy most people. The latest feather in his cap was when the Beyerskloof Merlot was awarded the SA Champion Trophy for the best young merlot in the country at this years SA Young Wine Awards.

To get to know Anri a little better, I asked him the following questions:

> Why did you become a winemaker?

I think it’s the passion and the effort that goes into making a  good wine that intrigued me. And the satisfaction of the final product. The influence of my father also played a part but he never put pressure on me to become a winemaker.

A trip to South America with my wife. Visit the Amazon jungle and Argentina.  To experience a true asado and to taste their wine.

None at the moment.

Rock songs.  Songs from bands like Doughtry and Nickelback.

If you can get past the first glass, it get’s better. As a student I  had a lot of it and I believe the quality got better.

Both.  I like camping but after a week I need more luxury.

I like playing gholf and to dive for crayfish. Watching rugby; but that’s not relaxation anymore! A braai with friends or family. 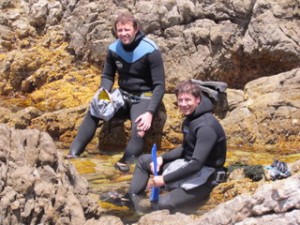 Anri and Travis after a dive at Vermont

In the tasting glass:

Vintage notes: The 2010 harvest will be remembered for small yields especially on the red cultivar but ensured greater quality.

Winemaking: The juice was soaked on the skins for 12 hours, to extract sufficient amounts of colour and structure; whereafter primary fermentation took place at 12°C for almost two weeks. After crushing, the grapes went through a press where all the juice was pressed at 0.5 bar, to produce a base wine. After additional three months on the lease the wine undergoes a second fermentation in stainless steel tanks. The wine is then left on the lease for another 2 – 3 months and then bottled.

Tasting notes: Opulent fruit gives way to classic biscotti, crushed apples, cinnamon and candy floss. Well rounded and inviting with a crisp acidity. A sparkling wine that resembles a classic French Champagne infused by our very own Pinotage. A perfect aperitif or drink for any occasion.

Wine makes a man better pleased with himself; I do not say that it makes him more pleasing to others. – Samuel Johnson

Alcohol is a very necessary article … It makes life bearable to millions of people who could not endure their existence if they were quite sober. It enables Parliament to do things at eleven at night that no sane person would do at eleven in the morning. – George Bernard Shaw

A man cannot make him laugh – but that’s no marvel; he drinks no wine. – W. Shakespeare

Images: Thinus Slabber and self