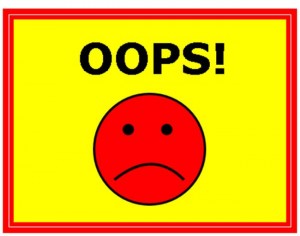 It seems to me we live in a perfect world.

No one makes mistakes any more.  Except me and the honorable Minister Fikile Mbalula.  That is if we can believe the newspapers. In hindsight our president got it right when he assigned minister Mbalula his portfolio – Sport and Recreation.  Maybe the minister’s mistake was that he concentrated too much on the recreation part of his portfolio?

But enough of politicians.  It was Winston Churchill who once said a politician needs the ability to foretell what is going to happen tomorrow, next week, next month, and next year.  And to have the ability afterwards to explain why it didn’t happen.

It is a well known fact that the only way to learn from your mistakes is to admit that you have made it. Real learning only start when you take responsibility for what happened and not blaming the universe and all the creatures in it.

Easier said than done, I can hear a lot of you mumbling.  Admitting is a stupid thing to do.  Wait till they catch you before your admit to failure.

It is sad but society only has recognition for winners.  And winners do not make mistakes.  Society regard mistakes as failure and shameful. In schools, families and at work we are taught to feel guilty about failure and to do whatever we can to avoid mistakes.

According to Scott Berkun, it is this sense of shame combined with the inevitability of setbacks when attempting difficult things that explains why many people give up on their goals. They are not prepared for the mistakes and failures they’ll face on their way to what they want.

If we are so afraid of failure, how are we then ever going to succeed?

For those of you that have been entrusted to lead (including all parents and grandparents) you must keep in mind that people only learn from the mistakes they make.  You must expect and encourage your employees, your kids, to take initiative and to make mistakes. Then only will they gain experience.

Remember that no expert marksman became a crack shot without wasting some ammunition!

So how can you curb the fear of failure in yourself and in those people you are entrusted to lead to success?  Here are a few things to keep in mind when confronted with failure:

• Irresponsibility is not a mistake. It’s just plain stupid!

• The world is not a perfect place. It’s only on magazine covers that people seem to be without any blemishes.

• Failure is not always life threatening. It’s a quite normal happening in life. (Except when you work for the bomb-disposal squad.)

• It’s important to realize that you only fail when you try. If you do nothing you can’t fail. Only doers fail. The rest just fade away.

• Tell people about your own failures.

• Even the greatest people in life failed. Here are a few examples of very successful people who failed before they succeeded:

Failure is not only meant for the losers in life. Every one fails some or other time. Make peace with failure and move on. Or in the words of Tom Peters:

Losers quit when they fail. Winners fail until they succeed. – Robert Kiyosaki

I’ve learned that mistakes can often be as good a teacher as success. – Jack Welch

Greatness is not achieved by never falling but rising each time we fall. – Confucius

Leave a Reply to Erich Click here to cancel reply.