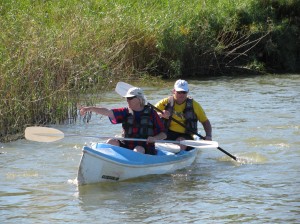 My friends, Martina and Leon, on the Orange.

Have you heard of the Groot Gariep River?

No. Not yet. Nada. Non comprende.

Maybe it is better known to you as the Orange River? The mighty one that rises in the Drakenberg in Lesotho and after 2 200 km flows into the Atlantic Ocean at Alexander Bay.

The Orange is also well known for the river rafting trips as it flows down to the sea. Let me urge you; if you have not done such a river rafting experience; don’t wait. Go for it! Do it sooner than later.

It was on one of these trips that a guide called Pieter showed me how to make Oranjerivierkool (Orange River Cabbage).  This recipe has been a favourite with our family and I would like to share it with all the enthusiastic outdoor cooks. This is more or less how it’s done:

½ a brick of butter

Method:  First fry the bacon in a pan and keep separate. (Use diced bacon or cut it into smaller pieces after it’s done.) Then shred the cabbage. Take a fairly large piece of the foil and place the shredded cabbage in the centre. Remember that you are going to wrap the cabbage into a packet/parcel made from the foil. Put blobs of butter on top of the shredded cabbage. Then sprinkle the two packets of soup over. Spread the bacon pieces evenly on top of the cabbage. Fold and seal the parcel tightly.  If the parcel is not sturdy enough, wrap some more foil around your parcel or use a double layer of foil.

Put the parcel into the coals next to your braai. Heap a few coals on top and remove it from the coals after 45 minutes. Do not use too hot coals because the cabbage will burn. Let it rather steam slowly in its foil bag. To serve, place the bag next to the other food, open it up and let the campers help themselves to Oranjerivierkool.

But be warned! Too much of a good thing may turn your canoe into a sail boat. Wind power all the way …

• Cauliflower is nothing but cabbage with a college education. – Mark Twain

• Having a good wife and rich cabbage soup, seek not other things. – Russian Proverb 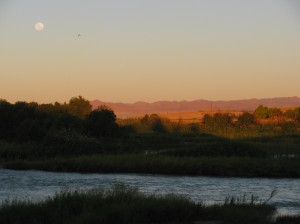